Menu
Log in
Register
Guest viewing is limited
You are using an out of date browser. It may not display this or other websites correctly.
You should upgrade or use an alternative browser. 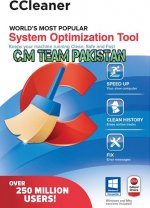 Multilingual, registered regular and portable versions in one installer!

CCleaner is an application for system optimization and user security. By downloading the utility from diakov.net, you can remove unused and temporary files, make Windows run faster and free up space on your hard drives.

Using CCleaner is System Safe
This program is designed to be easy and safe to use. CCleaner contains several levels of verification, so you can be absolutely sure that you will not delete any information necessary for the system to work.

Another useful feature is the complete erasing of files
. CCleaner also has the function of completely deleting files from a disk with several overwriting cycles, which does not allow them to be restored in any way.

CCleaner was made to be safe to use. It has many levels of security checks to make sure nothing useful or useful is removed. For very suspicious and cautious users, a backup system is also provided.

The CCEnhancer utility acts as a temporary add-on that allows you to add 500 new applications to the list of monitored software.